EMMA FINDS COMMON CAUSE WITH GIDEON, AND HENRY’S POWERS GO HAYWIRE, AS HOOK GETS BACK TO HIS ROOTS LOOKING FOR A WAY HOME TO STORYBROOKE, ON ABC’S ‘ONCE UPON A TIME’

“Mother’s Little Helper” – Gold and Belle convince Emma to help Gideon, explaining that together they can stop the Black Fairy. Henry experiences a disorienting shift in his powers that forces Regina to seek counsel from the previous Author. Meanwhile, in Fairy Tale Land, Hook attempts to win the assistance of an old adversary by betting his most prized possession on a game of cards. And, in a flashback, the Black Fairy tortures young Gideon in hopes of molding him into the perfect apprentice, on “Once Upon a Time,” SUNDAY, APRIL 9 (8:00–9:00 p.m. EDT), on The ABC Television Network. 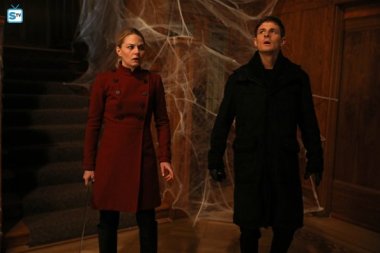