JACKSON THROWS A PARTY FOR CATHERINE AFTER HER SURGERY, AND ALEX’S MOM PAYS A SURPRISE VISIT, ON A RECORD-BREAKING EPISODE OF ABC’S ‘GREY’S ANATOMY,’ THURSDAY, FEB. 28

The Feb. 28 Episode Makes ‘Grey’s Anatomy’ the Longest-Running Prime-Time Medical Drama in History With 332 Episodes
“We Didn’t Start the Fire” – When Jackson throws a party to celebrate Catherine’s surgery and those who worked to save her, literally nothing goes as planned. Meanwhile, Helen pays Alex and Jo a surprise visit on a record-breaking episode of “Grey’s Anatomy,” THURSDAY, FEB. 28 (8:00-9:01 p.m. EST), on The ABC Television Network, streaming and on demand.

“We Didn’t Start the Fire” was written by Andy Reaser and directed by Chandra Wilson. 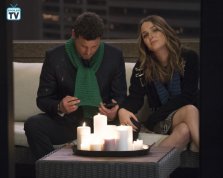